The Story of Our Move to Kelvin Hall (Part 2) The Story of Our Move to Kelvin Hall (Part 2)

The story so far…… (which Amy has eloquently described in part one) … took us from the shock of getting four weeks notice on our home for the last seven years through to securing space at Kelvin Hall in the space of 3 weeks.

For everyone involved, including me, it was a time of great uncertainty about our future and judging by the looks and comments from some of our partner organisations they clearly thought it might be the end of us. From the moment I received the news I knew we were in trouble. How could we find another venue in Glasgow with enough height and access to good public transport. I was also aware that we may struggle to afford the few options available to us. Many of our team had moved to Glasgow specifically because they could work or train with us. We had a great group of talented people built up over years that I desperately wanted to keep. We also had a committed body of students who are part of our community. In addition to people’s jobs being at risk I’d put 10 years of work and all of my savings into this seemingly fragile organisation.

When we finally heard we had somewhere to move to it was a massive relief and having the news that Glasgow Life was willing to help us out definitely felt like public recognition that what we do provided value. Finding a new home was a significant event and a great relief! So now we only had the little task of moving everything we own and install it all somewhere new…in 4 days ….between Christmas and New Year.

Business continuity was at the forefront of my mind, as a not-for-profit there has never been any fat in our budget where we could afford to go for any period of time without running classes and still be able to pay everybody. In addition we needed to be able to finance the move too, however we’d have to pick up the pieces of our budget in the new year, we had other priorities now.

Moving a school which has evolved over 10 years was a daunting task. If you can imagine that everything we do was built up like pieces of a puzzle one circus art at a time. Back in 2007 we started with just static trapeze and quickly added silks. By 2011 we also had flying trapeze, cradle, teeterboard and swinging trapeze. All of these arts were built up piece by piece with the equipment procured specifically to be installed in the Briggait, accommodating for all of the unique features of a building that evolved from the 1600’s. If this move was to be a success then some rethinking would be necessary.

Moving at this time of year did leave us with some significant challenges, firstly staff availability, after all who wanted to give up their Christmas to wear high visibility clothing doing a lot of heavy lifting and driving vans full of truss and unicycles? Fortunately we had a willing band of circus people who generously gave up their break to put on safety boots and hard hats between their family gatherings and Hogmanay.

One great thing I love about Aerial Edge is we have a lot of people who like what we do and are willing to help out. This can take the form of loans of equipment, good technical advice, or of people donating their time, sometimes even ‘volunteering’ their family members. We ended up having up to ten people helping out on some of the days which allowed us to split the team between the two venues, breaking down equipment and loading trucks at one end and unloading and setting up at the other. Getting the equipment across was working out well, putting up the rig however was a different matter.

One of the first tasks in putting up our 8m high rig was to ensure its safety, and the biggest unknown was the Kelvin Hall floor. It had clearly seen a lot of use with everything from athletes, gymnasts and even actual circus elephants on it over the years, and having been a building site for the last couple of years hadn’t helped matters. When erecting any truss one important factor is the floor. We needed to ensure the floor anchors would hold our rig up with the weight of people swinging on it. Previously we had used mechanical fixings drilled into the floor of the Briggait which were capable of holding over a tonne of load on each point.

If we wanted to be running aerial classes at Kelvin Hall I needed to test this floor to see what it could hold. After spending a day searching around for the exact tools we needed I put in the first anchor point and set it up for testing. With very little pressure the test point slid out like it was being pulled out of warm butter……..OK not to worry all floors are of varying consistency, let’s try that again at another spot…………Nope all the same! The concrete was of too poor a quality to use with our anchors.

So what was my plan B? One tried and tested solution was to use ballast, and we would need a tonne of weight for each point.To secure it for all of the different disciplines that swing on the rig in many different directions meant we’d need 12 tonnes of ballast, and this was not a practical solution because I’d effectively be building a 1m high wall all the way round the rig.

The more obvious solution was to change to using a chemical bonding agent and much bigger anchors. The only problem with this was all of the engineering companies who could supply them were closed through to the second week of January. By this time numerous vans had been delivering circus equipment, tumble tracks were being assembled around us and acrobatics areas being built. We were pretty sure we’d be able to run floor based classes as soon as we had a floor and some mats, the rest was looking a bit doubtful.

This is yet another point in the story that proved that having good friends to the organisation was invaluable, especially when they turn up and deliver exactly what you need when it’s something seemingly unattainable. Floor anchors, chemical bonding agent an applicator and help in getting it all installed! Who knew…? 24 hours later we had the floor points in and tested.

Due to the limited availability of lifting equipment in Glasgow over the festive period we found we were left with the metaphorical last turkey in the shop and we soon realised the equipment we been supplied wasn’t up to the task as it wasn’t capable of lifting our rig to anything above 5 meters, just over half the height we needed. This is a procedure we’ve performed several times over the years so we had a good working method to do it safely but without fully functioning equipment we knew we were not going to get anywhere.

Just as I had called the job off for the day with a great sense of frustration, I got a phone call asking how we were getting along. After giving him a status update Mike asked “would you like to borrow a crane?”. Thirty minutes later we were on the road together through the driving sleet to pick up a crane from a depot an hour from Glasgow, and an hour later after clearing a foot of snow of the crane bed, we were on our way back. There were a few pieces of equipment that were giving us trouble earlier in the day. Getting my cradle on to a truck was one problem; its a 5m high piece of iron that weighs around three quarters of a tonne, even disassembled the top part weighs around 300Kg and was a real pain to get it loaded by hand.

Using the opportunity of having a crane, we called in at the Briggait and quickly hoisted the cradle onto the back of the truck, we were in and out in 10 minutes with Amy there ready holding the gates open with a set of round slings in hand. We arrived at Kelvin Hall 2 hours before closing time on the last day of our 4 day mission. From experience we knew that erecting the rig would normally take several hours of painstaking effort to get it level and secured in position. What a difference a crane makes! This time with the addition of a laser leveller we were all finished within 90 minutes.

This was very much a story of being saved at the last minute by so many people in so many different ways.

The only other item we’d had any difficulty moving was our shed. This was partly because I was afraid if we moved it the whole thing would just collapse into pieces! The shed was made from a kit we had ordered several years ago, and over time it had been patched, repaired and ‘enhanced’ so taking it apart and putting it back together wouldn’t be fun! After measuring it we found it was just too wide to fit in the back of a Luton van so I reluctantly said to the team ‘you’d best take it apart and load it on in pieces.

So later that day the ’shed team’ sent me the best photo of the week! 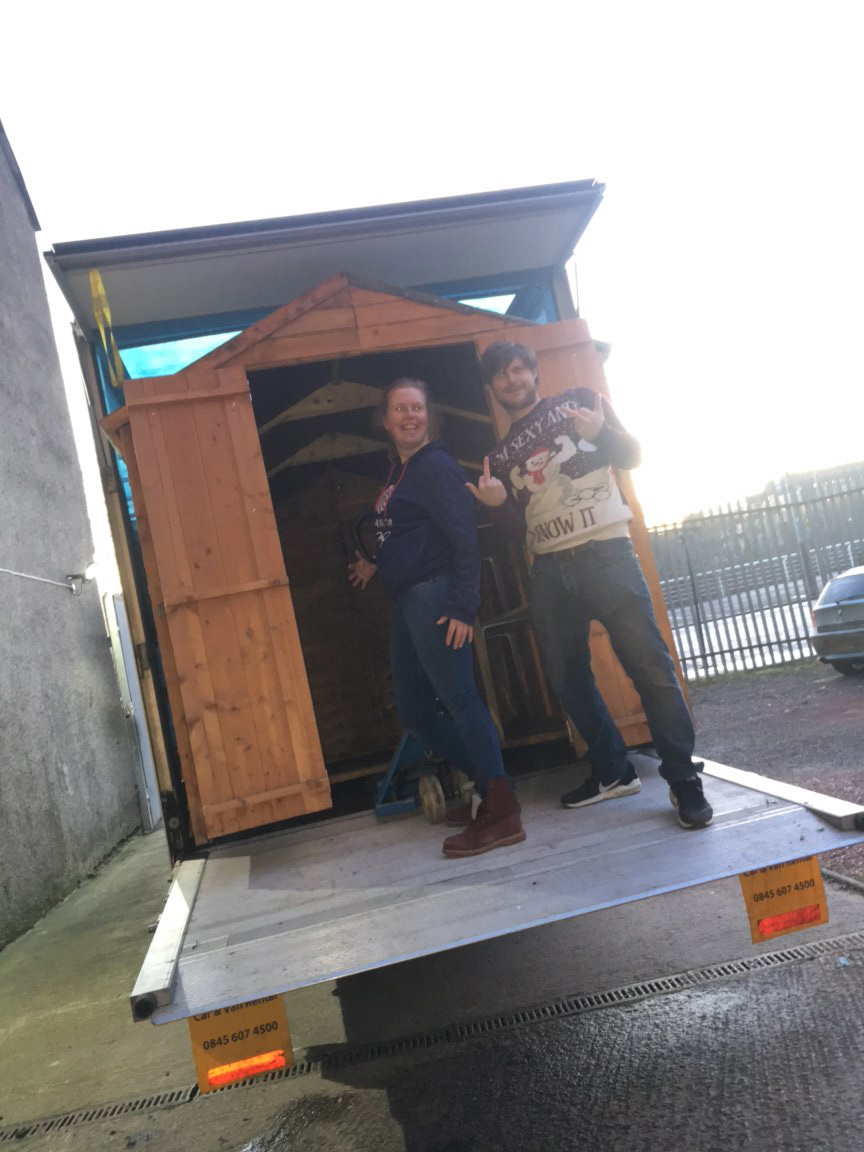 It’s just a shame we don’t have any pictures of how they managed to get it back out again at the other end!

We’ll still be working on our new home for some time to come. Electrical supplies, heating and so many other things are needed, but we had so much support and help and much of it coming just in time and just how we needed it, I wasn’t the only one calling it a Christmas miracle.

This is a picture of 4th January 2018 our opening day 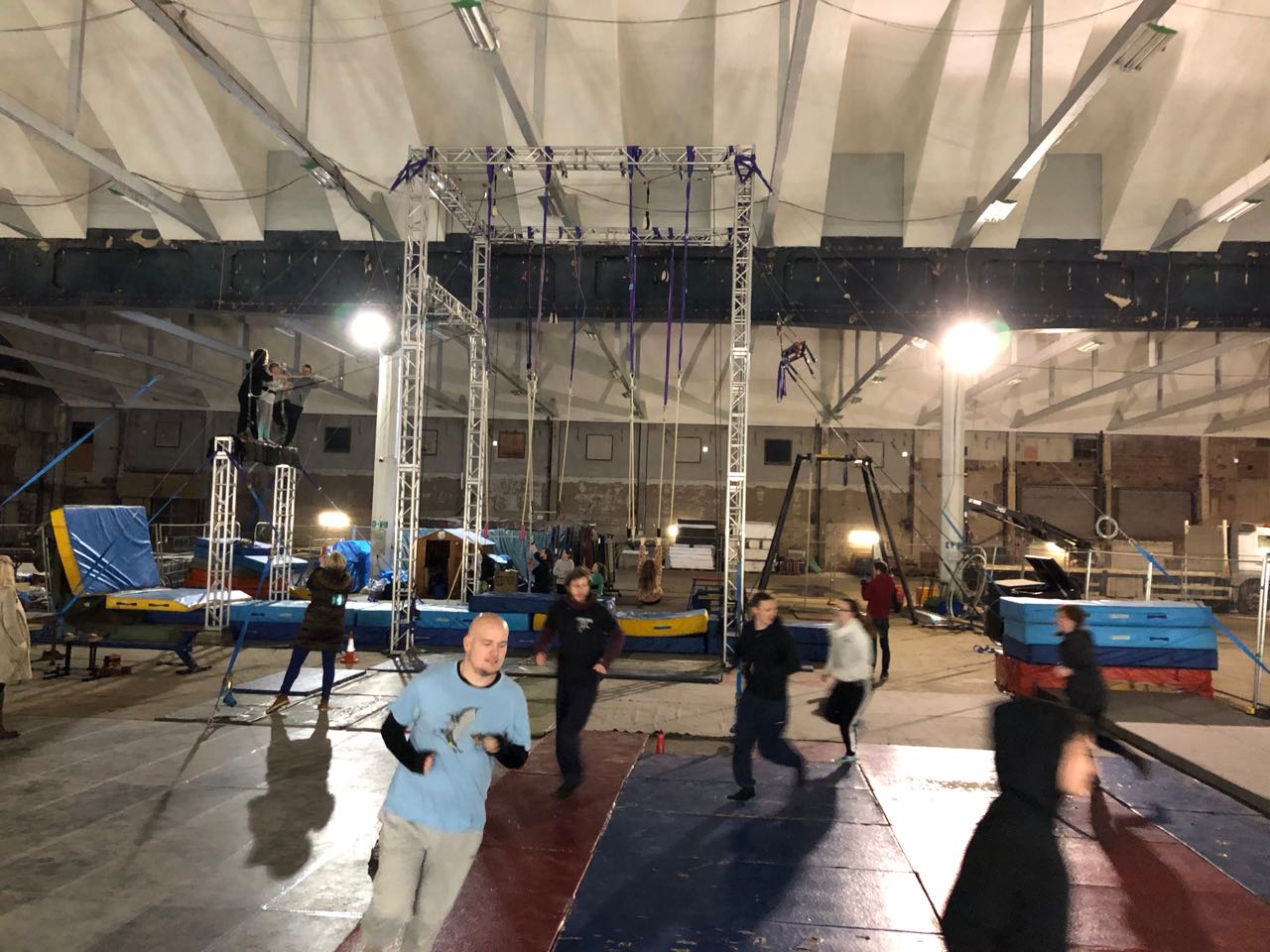 ##Thank you! Thank you so much! Many many thanks to everyone who helped out in ways that are too many to mention but I would like to call out a few particularly: